Obviously the big news from last month was Audra's birth :) I'm going to attempt to keep the weekly updates focused on Audra, though, with these monthly updates focused on Josie but also for the family as a whole, since I'm planning to do a year of weekly posts for Audra and then eventually convert them to a book as I did with Josie. Can't have accusations of being unfair right from the start ;)

Josie is doing very well so far in her new role as a big sister. I was just hoping she wouldn't be super jealous, and she has far surpassed that, and instead she is always asking where Audra is, helping us change her diaper or feed her (and encouraging her by yelling, "Eat, baby, eat!"), and being extremely diligent about making sure Audra is covered with a blanket. Always. I suspect the jealousy will come later once they have to share toys, but she seems to be fine with sharing Ryan and me so far. She had a random crying fit once when Ryan dropped her off at school, told us she didn't want to go to school a few times, and has asked (or tried) to sleep in bed with us too, but so far that seems to be the extent of her reaction to the new family dynamic. She also has been quite supportive to me, although I don't really want my 2-year-old to have to prop me up too :-\ But there have been a few times where I've started crying from being overwhelmed or frustrated (with loud noises/chaos being a bit of a trigger for me, so it tends to happen when Josie is around), and she's patted me on the arm, given me a hug, and said, "It's ok, Mommy. It's ok." And then yelled at Ryan to give me the baby. It's very, very sweet, but I'm also trying to stay calmer in front of her since I don't want this to be a scary time for her, or for her to associate my frustration and crying with Audra. 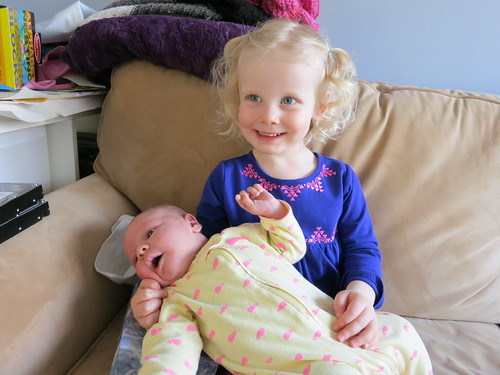 We've been trying hard to make sure Josie is getting enough attention, and to that end, our families have really helped us out, with frequent visits and fun outings for Josie. It still hurts me to not get to spend as much time with Josie as I would like, but I'm usually able to get a few minutes one-on-one with her each day, and I know that things will continue evolving and we'll eventually find a balance that works. Truth be told, it actually hurts me a bit too just to see how well she seems to be doing without all the attention I was paying her before - I thought she would be more upset by that, but she instead just seems to seek out the attention or interactions with me as she needs it. She'll come find me (and Audra) to say hi when she gets home from school, and will come snuggle up to me when she needs to recharge, and only on the rare occasion has she tried to pull me away from Audra to read to her or something. So yes, my attention is apparently not as important to her as I thought it was, but that's a much better outcome than her trying desperately to spend time with me that I don't have to give her at the moment, so that's probably a good thing right now :) 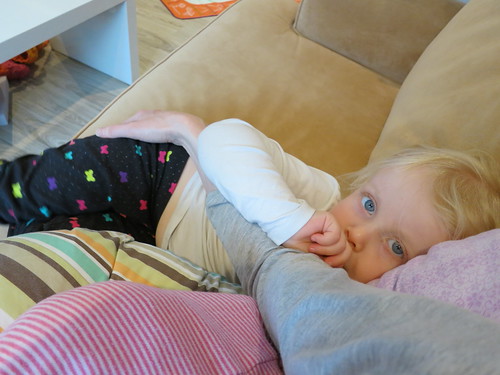 [My view most nights - baby on my lap and Josie right next to me]
Josie also did very well during Audra's birth. Since we were planning a homebirth and thought it would be quite likely that Josie would be there for at least part of labor/delivery, we tried to prepare her for it as much as we could so it wouldn't be some traumatic, bewildering experience for her. So she understood the general process, and since she got home an hour before Audra was born, she had a good time hanging out with all of us in the sun room until our midwife asked for her to be taken out of the room while I was pushing and then again after I delivered the placenta (which is when things went a little haywire). Beyond that, Josie was unruffled during delivery, and a little subdued but still fine coming back in to meet Audra for the first time. She also did very well with a room full of EMTs, asking their names and chatting with them while she ate her dinner :) She did cry out for Ryan as he left to meet me at the hospital though, which was a bit unusual for her. My mom stayed with us for a week and a half (so just before Audra was born and then about a week afterward), which was a wonderful help for us, and Ryan also went back home the second night to do dinner and bed-time with Josie since that was the longest we had ever been away from her. 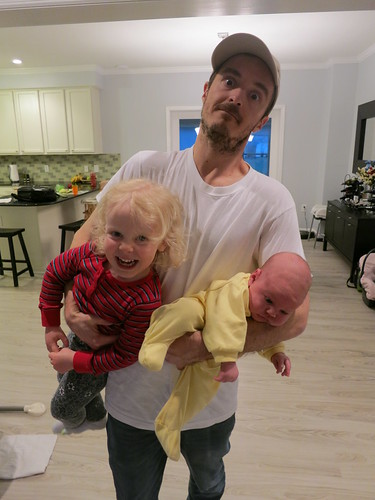 In other news, Josie's language skills have really improved this month. She's speaking more clearly, correcting some of the things that she had been saying her own special way (e.g., "banana" is now "bamana" at least, rather than just "mana"; "what doing" is slowly being replaced with "what are you doing"), and has been initiating conversations more rather than mainly just responding to questions. So she'll tell us a fine story about all of the things she did at school that day (most probably not true), and I loved watching her brain churn away to come up with a workaround when she wanted more apricots. She's not that familiar with them, so since she didn't know the word for them, she just said she wanted to open the closet (i.e., pantry) and get more. Before, she likely would have just cried ;) Josie has also been putting in requests for activities lately, so just about every day for a while, she'd ask to go swimming (complete with doggy paddling hand motions), and now she's moved on to asking to go grocery shopping every day after school.

Josie also seems to be enjoying one of the side effects of Ryan and I being on leave: Ryan's cooking, since we're not eating leftovers from his work right now. We've eaten so well the last few weeks, and Josie has even asked for seconds - and sometimes thirds - of her dinner. We'll also give her some fruit if she has tried everything on her plate, so one night she had almost two full plates of mussels, okra, and rice, and then two clementines afterwards. Her stomach is a bottomless pit sometimes ;) 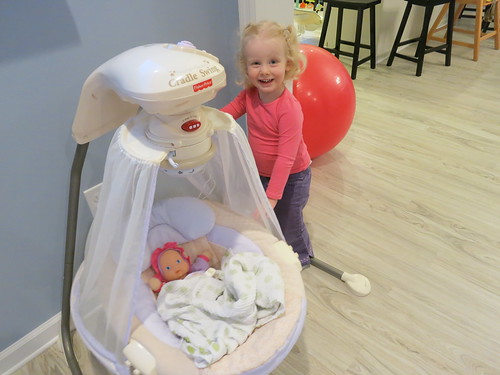 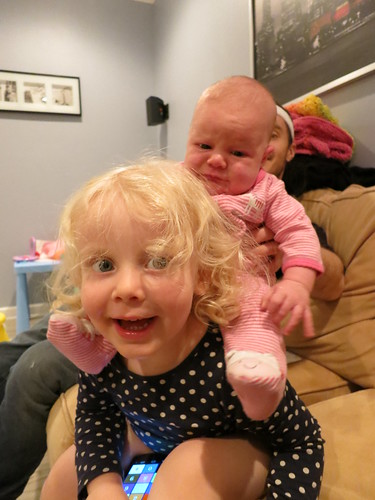 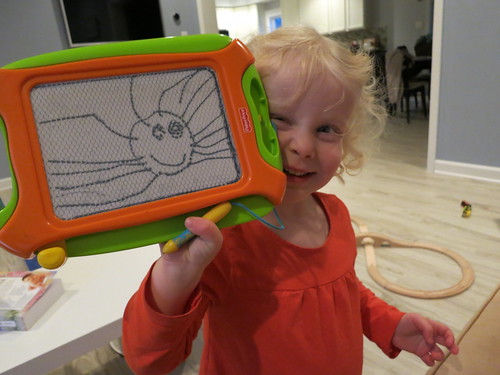 [Even Josie's spiders are happy] 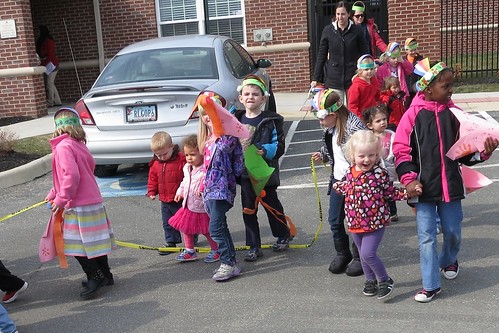 [Hat parade at school - just minus the hat] 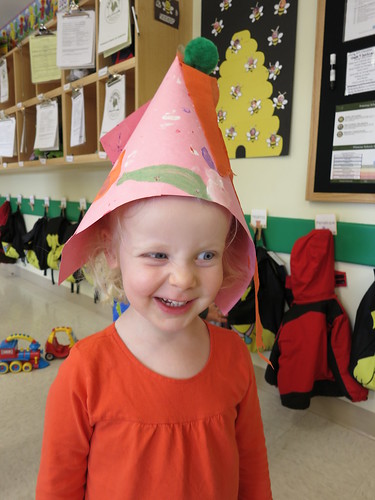 [And there's the hat now too] 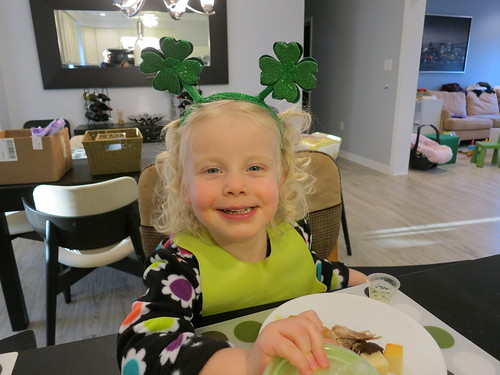