And so ends our last full week of Audra's life at home. While I'm still a bit disappointed that I'm not taking off the full 12 weeks as I had originally planned, it seems a little balanced out since Ryan ended up staying home with us longer than the 7 weeks he had originally planned. So Ryan starts back at work on Monday, and I'll be doing half days Monday and Tuesday as Audra starts daycare, and then I'll be back to full-time on Wednesday, when she'll be 10 weeks.

Given that, I've been trying to get in as much time together as possible, since I'm not going to have constant access to Audra cuddles every day after this week. So I've just been having her take her long morning nap on me, which means hours of her sleeping on me while I catch up on the internet :) I think she's been needing a bit more comfort for whatever reason this week too, since - once we got past some nursing issues - she's been comfort nursing much more than usual (through most of her naps this week), so hopefully this is helping meet a need of hers too.

This week was a bit of a rough one from a nursing perspective. Audra was very fussy about nursing for at least the first part of the week, to the point that she was starting to refuse feedings. Now, I probably offer to nurse more often than she actually needs, but it was still disconcerting that she was fussing and upset enough that she wouldn't eat. She even cried through most of yoga and refused to nurse, so due to that and her wailing the whole way home again, I'm most likely going to skip yoga this week, which would have been our last time anyway. It just doesn't seem worth it to put her (or me) through that :(

Sleepwise, she's been napping for a decent amount of time overall, although still primarily on one of us or in the carrier. She also gave us her longest stretch of night-time sleep yet - 8 hours! She's of course still a baby, though, so inconsistency is the name of the game :) For example, two nights before the "8-hour stretch" night, she didn't fall asleep nursing, wouldn't be consoled by anything Ryan tried, and then after half an hour of that, she was hysterical and yet then fell asleep right away while nursing. She does make us work for it sometimes, but all in all, she could do much, much worse. 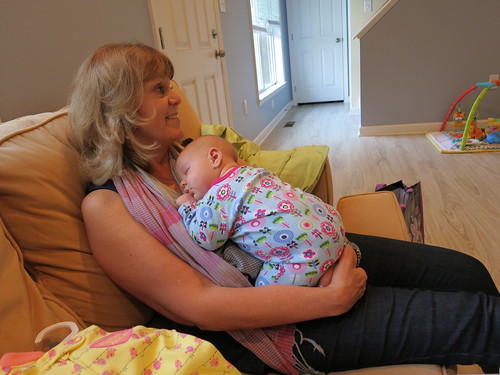 Audra had her two-month well baby appointment this week. She measured in at 15lbs 1.5oz, 24 3/4" long, with a head circumference of 15 1/2". While her head measurement was in the 90th percentile, her weight and length were off the charts. She's hitting all of her milestones and doing the wonderful baby things she should be doing now (smiling, vocalizing, kicking), so everything looked good. She also got her first vaccines, and while she did super well with them at the time (taking the oral Rotavirus one quite well, and then only crying for a few seconds after her DTaP/Hib/polio shot), three hours later, things got a little hairy when she woke from her nap just scuh-reaming. Nursing was not happening and bouncing her was not cutting it, so we quickly departed for a very brisk walk. After pitifully crying for a while (even while sleeping), she finally settled down and did fine for the rest of the evening, and even the overnight wasn't too bad, although she did wake up for the first time at 2am, which is a couple hours earlier than normal. 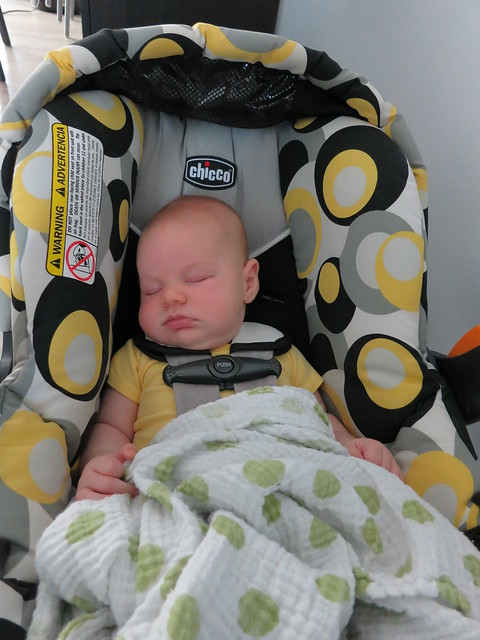 [The calm before the storm - back from the pediatrician, but before the screaming started]

Audra seems to be more aware of her hands now, and seems to be controlling them better too. She has gotten them to her mouth to gnaw on more deliberately than before, and even grabbed a rattle for the first time :) 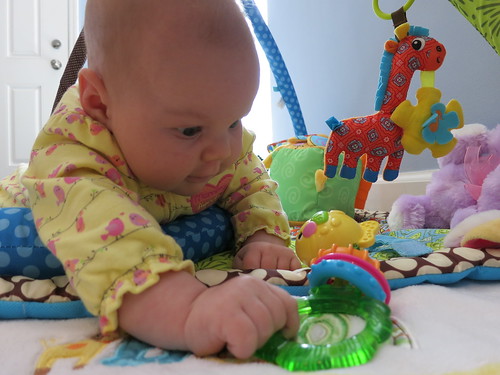 She had the most adorable conversation with Ryan the other day, comprised entirely of the two of them cooing at each other :) Too bad she clams up as soon as she sees the camera come out though, but hopefully I'll be able to catch more of her cooing before it goes away. She also went to her first movie this week. The cinema drafthouse by us has baby days, where the lights are a bit brighter, sound is turned down a bit, and a crying baby won't get us kicked out ;) She did super well (ignoring the diaper blowout), taking a nap, nursing, and sitting contentedly in our laps the rest of the time. 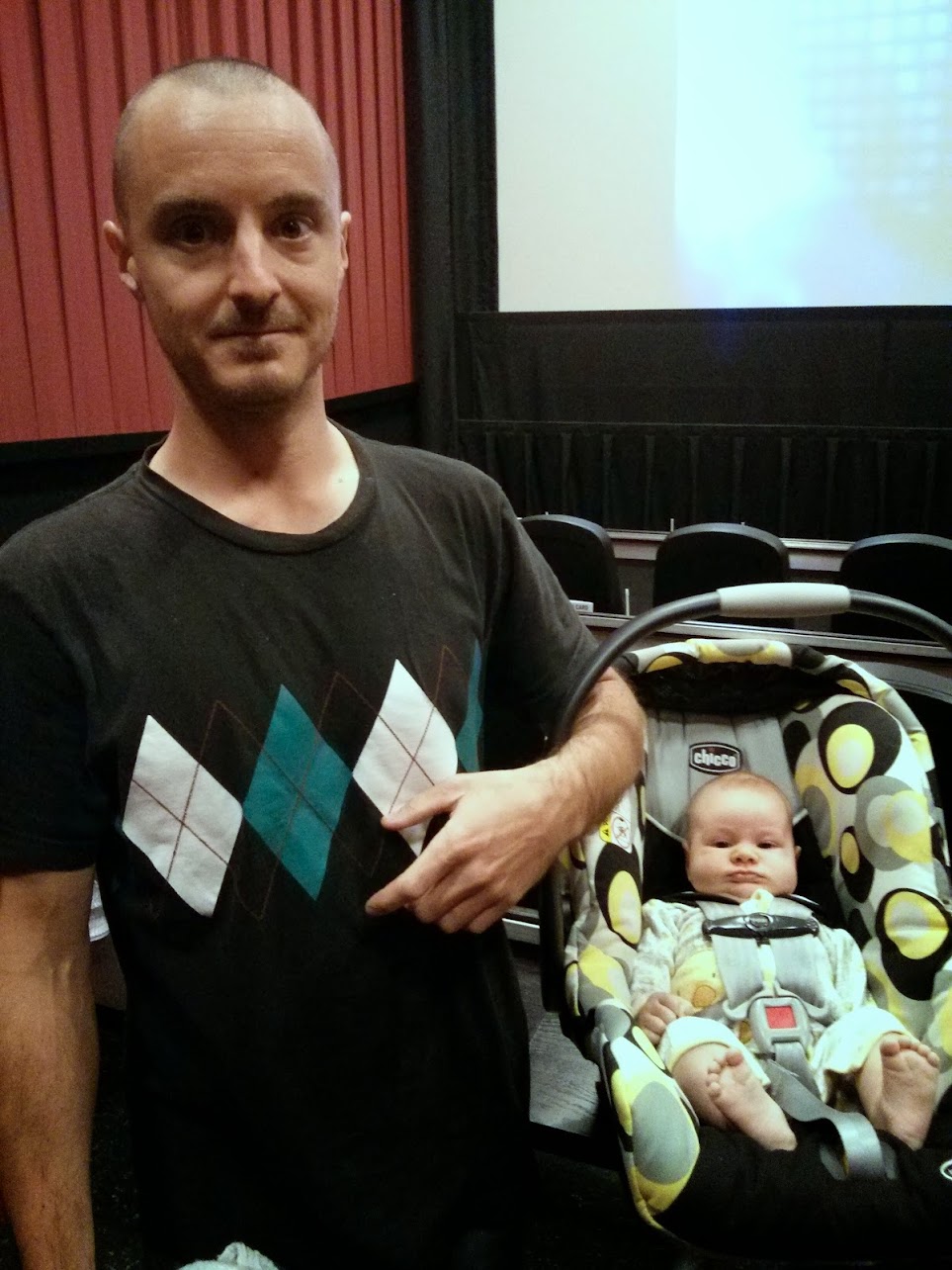 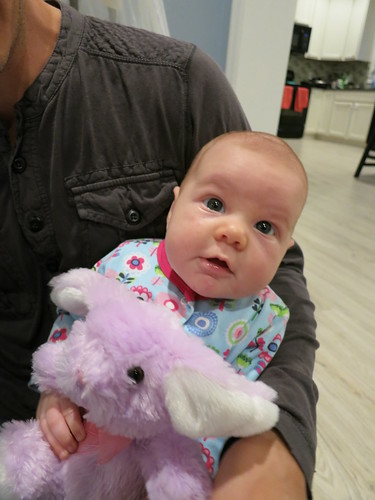 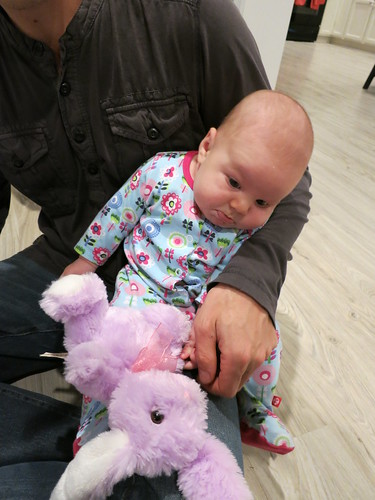 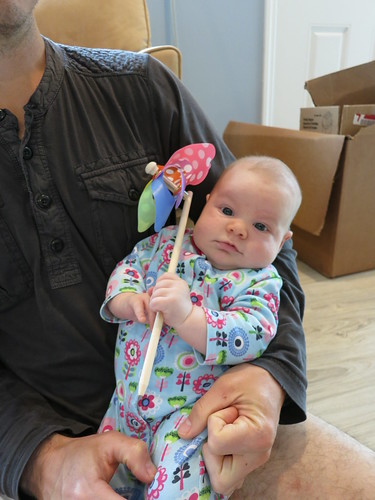