Since I wrote about our routines for Josie (here and here), I thought I'd record our current routine for posterity too, before it all changes with us returning to work next week :)

Our days normally start around 6:45am, when Ryan goes to wake Josie up to get her ready for school. I stay in with Audra until about 7:15am, when I attempt to sneak out of bed without waking Audra (almost never successfully) to get dressed, eat breakfast, and help see Josie off to school. If I don't take Josie myself, then I'll play with Audra for a bit until usually just before Ryan gets back. 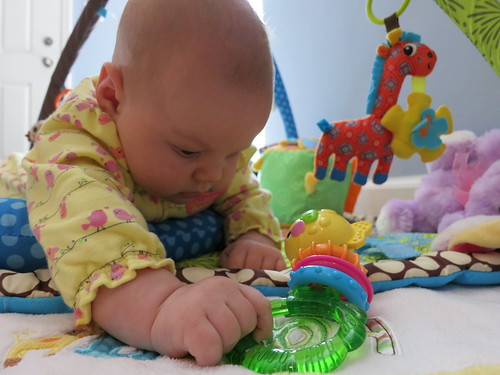 She nurses the first time around 8-8:30am, and since I've given up on napping with her, I normally feed her on the couch since I'm more comfortable there for long periods of time. Audra will usually nap on me for 2-3 hours while I catch up on my internet browsing, TV watching, and book reading, unless I decide to try moving her to a swing for her nap instead. 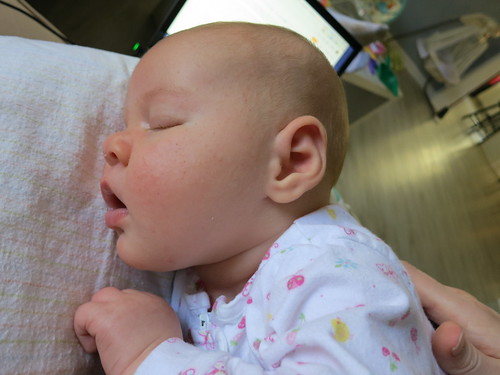 Ryan is in charge of the cooking while we're on leave, so he'll get some fabulous lunch together and I'll either eat on the couch (if Audra is still sleeping), or we'll eat lunch together with Audra in her bouncy seat. After lunch is usually more nursing/sleeping, obviously with playing mixed in there too :) Playing at this stage usually involves laying her on my lap and singing her songs (she particularly liked one that was comprised entirely of the word "snorty" repeated over and over again), while playing with her feet and hands. 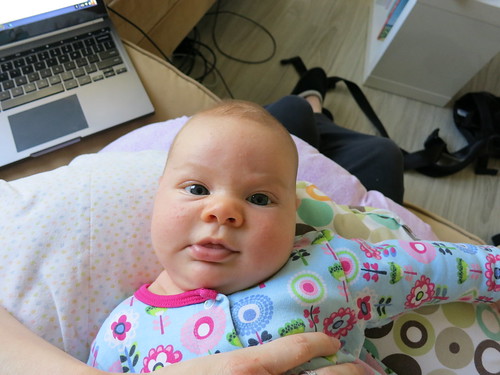 Our backup plan for when Audra doesn't fall asleep after nursing is to put her in the carrier, and then we'll either all go on a walk, or Ryan will go out and do yardwork with her. He normally takes her on a second walk mid-afternoon, which is when I'll stay behind and clean/put in my hour of work. 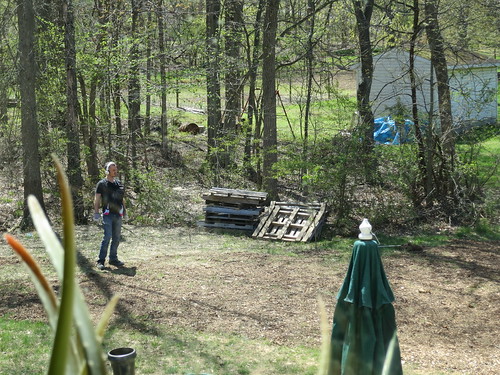 I usually nurse again around 4pm, and if Audra is awake afterward, I'll hand her off to Ryan and then go pick up Josie from school around 5pm. Once Josie's back home, the naps get a bit spottier, but Audra will normally sleep off and on for another hour or so before bedtime, usually in the carrier. 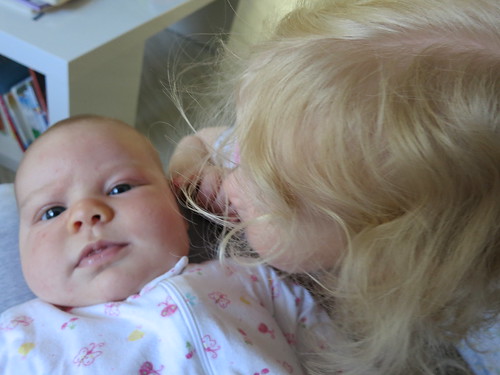 Ryan will also take her for a walk in the evening if it's really been a long time since Audra last slept, since she gets more upset/erratic as the day passes and she gets overtired, and then sometimes she won't calm down even to nurse. On a good day, she'll nap around 5-6 hours total over the course of the day. On a bad day, we can normally still eke out 3 hours of napping, but it's far more labor intensive, since when she's having a rough time sleeping most of her naps only occur in the carrier, and we must be walking (or in least in motion) the entire time.

We try to do some outside time with both girls after dinner, and then Josie starts getting ready for bed just before 8:30pm. Once Josie's in bed, I'll go take a shower/clean up while Ryan entertains Audra, then I start nursing her down by 9:15pm. She is usually asleep between 9:30 and 10:30pm, and there seems to be three options so far: she falls asleep quickly and is out for the night, she falls asleep quickly and then wakes a half hour later to nurse again, or she is still awake (and usually upset) after nursing, in which case Ryan sometimes takes her back to walk with her for a while before I try nursing again.

I try to fall asleep when I'm nursing Audra down (since that seems to help knock her out too), then I wake up again to pump around midnight. She normally wakes for a diaper change and to nurse sometime between 2:30 and 5:00am, with the likelihood of a second wakeup increased if she wakes up earlier the first time. She also tends to sleep more restlessly the last couple of hours, so she's often comfort nursing most of the time or I prop her legs up on mine, which seems to settle her again. Then the sun comes up and we do it all over again :)
at 11:58 AM

Email ThisBlogThis!Share to TwitterShare to FacebookShare to Pinterest
Labels: Audra