One full week of daycare down, and Audra is doing much better with it now :) While she's still not doing too well with sleeping there yet (just little cat naps throughout the day, and maybe an hour nap when it's naptime for the bigger kids), she is very happy throughout the day... as long as she's not left alone. She apparently cries if she's not being held or isn't in the main room with the rest of the kids, but that just makes sense to me. Why would a defenseless little baby be content being left alone? Maybe some are and my perception is just skewed since Josie was pretty high-touch too, but I'm fine with it. I'm sure as she gets bigger and more mobile that she will be more content on her own anyway.

Although Audra is only getting maybe a couple of hours of sleep at daycare now (down from the 5-6 hours she was getting before), she is now getting 2-3 hours more at night, so I'm hoping it's balancing out for her. I was able to bump her bedtime up, so she's now usually taking a short nap on me when she first gets home and I'm eating dinner, then I'll wake her up when I'm done, get her ready for bed, then nurse her down again. She's normally asleep by 7:30pm now, but the even bigger change is that she is swaddled and sleeping in her crib for the first stretch of the night :) 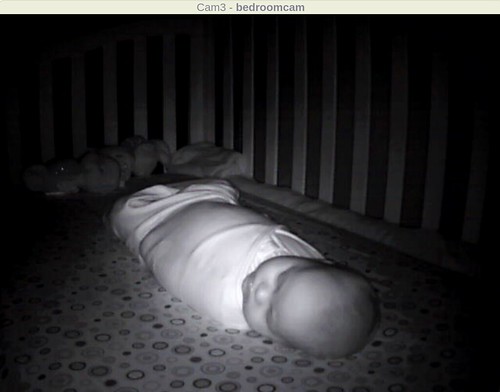 What a difference a couple of months makes for a newborn! The last time we tried swaddling her and putting her in her crib was when she was first born, and she kicked and flailed every 15 minutes and then woke after a couple of hours. Now she's been sleeping pretty solidly from 7:30pm until about 1:30am, although it does kind of fall apart after that. She wakes up mad/hungry now that I'm no longer catching her before she fully wakes up, so I'll nurse her and leave her in bed with us the rest of the night. The last couple of nights were good in that she just woke up once more around 5am, but she tends to be so restless after the first feeding that there were several nights when she was awake again every 1-2 hours for the rest of the night.

So there are some tradeoffs to her earlier bedtime and sleeping in the crib - I'm excited to have maybe 20 minutes with just Josie now before she goes off to bed too, and then I even have an hour or so to myself after that... usually spent cleaning and preparing for the next day, but once Ryan and I actually sat down to watch TV together for the first time since Audra was born :) The downside is that I'm actually getting less sleep though, since I'm going to bed a little bit later now and she's waking up more frequently than she was when we were exclusively bedsharing.

Audra just seems like a different baby now, although I'm not sure if it was all her own development or because of daycare. But she is just so much happier when she's awake now, and for much longer stretches. I did eat some foods this weekend that she seems to be sensitive to (broccoli and butter, most likely), since her face broke out again and she was much more gassy. The gassiness didn't seem to bother her as much as it had been though, which is a good thing, although of course I'm going to try to be more diligent about diet. Her crying has also changed some, and she sounds much more melodious now... which is much preferred to her normal top volume, stress-inducing cry, which she still does every day on the drive home :( She's also squealing some, and having adorable little conversations with us.
But overall, the transition to daycare/back to work seems to be going pretty well. We're still getting used to our new routine, and will hopefully find some more efficiencies so we can get more time back. Mainly probably buying more pump/bottle stuff so we don't have to wash those every day, and once I start working from home again, that will help with keeping the house clean (since I clean during what would have been my commute time) and the food prep (since I pack the following days' meals when I make up my breakfast and lunch that day). We've found little things like that - and prepping as much as we can the night before - are really helpful in getting everything done that we need to.

Daycare has also given me a much welcomed shift in perspective, since it's helped me realize (again) that it isn't as important as I've built it up in my head for Audra to get these huge chunks of sleep during the day. She's very tired when we pick her up in the evenings, but since she's sleeping well overnight and happy during the day, I'm trying to let go of my worries about her some and just enjoy spending time with her, even if she's awake when I think she should be asleep :) I'm just appreciating my time with her more, as it's so concentrated now... and although I'm only seeing her awake for maybe 1-1.5 hours a day during the week right now, I know I just need to be patient and eventually we'll get more awake time with her in the evenings too. 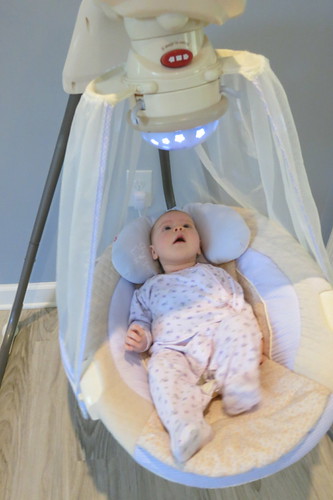 [She does love the stars on her swing] 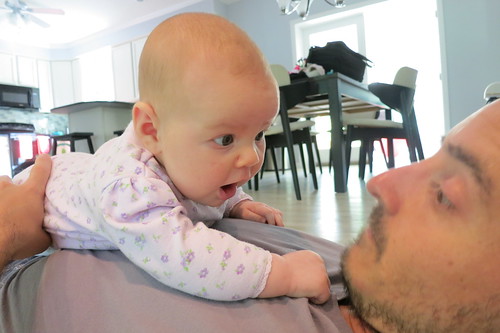