After the early successes with Audra sleeping swaddled last weekend, this past weekend she decided she actually did not like being swaddled, at least for naps. I did not give up too easily since it does seem to help her sleep (once she is asleep), but since she squawked and flailed and fought every nap, I tried leaving one of her arms out instead. She did well with that though, so I guess it wasn't the end of the world - I also just didn't want to lose my newfound freedom so quickly of being able to leave her for naps :)

Audra seemed to be having more gas issues overnight this week, so she would start kicking more around 11:30pm. Sometimes I was able to get her to resettle by putting my hand on her (or under her, in one sleep-befuddled instance), but other times she fully woke and was none too pleased about it - and me neither, since the earlier she wakes the first time, the more disrupted my night becomes since she will then wake every couple of hours after that for the rest of the night. And there were also a couple of nights (in a row, which made it all the better) where I didn't get to sleep more than 1.5 hours at a time the entire night. I'm still able to function surprisingly well after all that (ignoring my forgetfulness and the fact that I'm messing up homonyms now, which is driving me crazy), but the first few minutes after I realize I have to get up for the day after a rough night are the most difficult. But then Audra throws in a night like last night, where she slept from 6pm until her first wakeup at 3:15am, and things suddenly seem awesome again :)

Josie once referred to Audra (or maybe just her smile, it's not entirely clear) as "Big Happy", and that seems to be an apt descriptor for her :) She is as happy as can be in the mornings, and is just beautiful with her smiles and cooing... if only she would let me catch her at it with the camera! She gets so distracted by having a camera in her face that I haven't been too successful with capturing just how happy this little baby is. Well, except for in the car and when she's overtired - she's definitely not happy then. And after several weeks since the last time I heard her laugh, she chuckled again in her sleep this week - I'm still hopeful that she'll start laughing soon while she's awake too :) 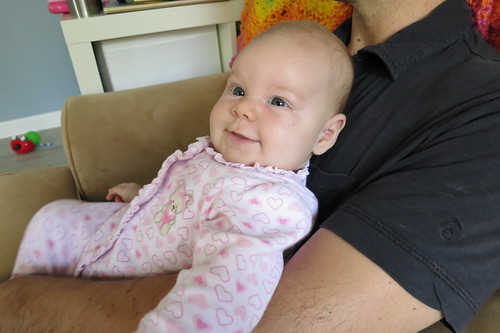 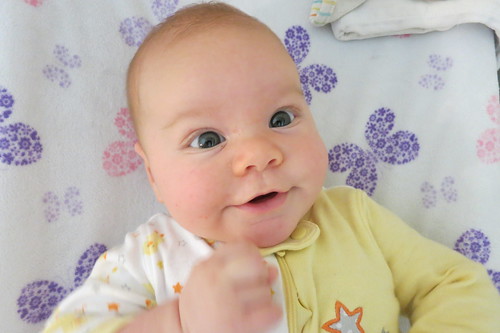 Audra went back to the doctor on Friday to get the rest of her 2-month shots, which she seemed to handle pretty well. She didn't wake up screaming from her next nap, as she did with the first set of shots, although since the roughest nights of sleep were those right after her shots, maybe her sleep was still affected a bit. She's now up to 16lbs 8oz, and at this rate, it looks like she'll be out of 6-month clothes within the next few weeks. I've been able to keep up with her just fine too, which is nice not to have that stress. Since I struggled a bit with pumping enough for Josie at first, I purposefully tried to keep my supply greater than what Audra needs, at least until she settles into daycare more and is eating a consistent amount each day. She has been eating about 16oz a day at daycare (sometimes more, rarely less), so I've been able to keep up by pumping every 2 hours at work (so 4 times total), freezing about 4oz a day, and not having to pump before bed or overnight - yay!  If she continues eating about this much (and I continue pumping more than she needs), then maybe in another month or so I'll feel comfortable enough to drop a session during the day. 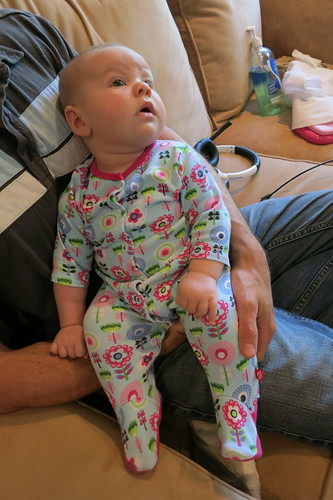 [Mesmerized by the ceiling fan] 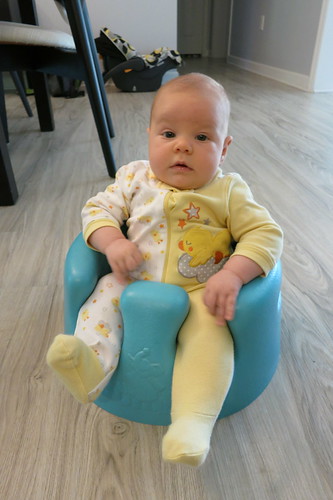 [First time in the Bumbo - she was thrilled] 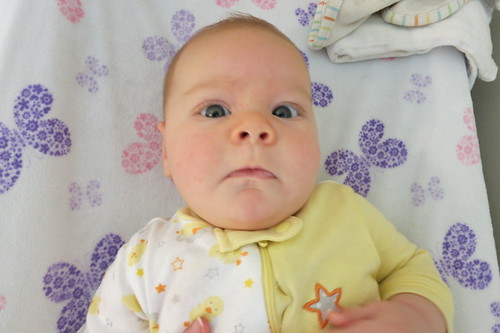 [About done with the camera blocking her view of Mommy]
at 10:13 AM