Last month we decided it was finally time to go (mostly) all-in on the potty training. Josie had been having "potty time" for probably about six months now, when she would get to run around pants-less in the pool room (which isn't carpeted) while Ryan shot some pool, and while she got fairly reliable about using the potty then, we never really progressed beyond that. After a few nudges from her school (perhaps everyone in her class was sent home with a potty training letter, but maybe not...), we decided we'd take advantage of her having a three-day weekend for spring break to ditch the diapers and see what happened. What happened is not what I was expecting - instead of lots of accidents ("learning opportunities", as I was calling them in my head), she just held it instead. So not many accidents, but also not a great solution either. Nevertheless, we sent her to school that Monday with half her wardrobe in her backpack, and received it back throughout the week ;) But after a couple of weeks of accidents, she seems to be getting it now. She's still in diapers for naps and overnight for the time being, but the accidents have decreased and she's doing quite well... and was recommended to move up to the next class at school now too :)

Josie was quite funny last month. One of her teachers mentioned that Josie is her shadow, following her around all day, holding her hand, and trying to help her. Josie then refused to say good-bye to her, and grumped that "I not a shadow, I'm Josie!" Josie's favorite place also appears to be the grocery store, as she asks nearly every day if we can go to the grocery store after school. Once when I actually told her yes, she flung her arms around me and said a fervent, heartfelt, "Thank you, Mommy!" One of her longest spoken thoughts so far was when she explained to me, "I no like hot sauce, it's too spicy. I like blueberries, grapes, maybe?"

To her delight, Josie came down with another cold, so she announced several times a day that "I'm sick! I am sick!", since when she's sick I give her elderberry syrup :) She also likes to ring the doorbell when we're coming in from outside, and then allows only one person to enter the house at a time so she can properly greet them - or so she can greet whoever is already in the house, as when she went inside and said "Hello, Roomba!" ;) She is recounting her experiences more too, and actually told me about what she did at school rather than just answering yes or no when I questioned her. She also told me that "Daddy talked and talked and talked to a man" at Goodwill, which was one of the first times she called him out on something- I have a feeling it won't be the last, though ;)

[Didn't realize I was recording at first, but thought this was still funny snippet of a typical conversation with Josie]

She has been exploding with imaginative play lately - she actually started played with her cars (giving them drivers and destinations), and was going on and on about going to the doctor. She started pretending to pour tea and eat oranges a few weeks back, but now is telling us that there (invisible) cats, blobs of food that look like animals, and that her spoon is cat. She still loves mirrors, and I've caught her more than once explaining things to herself in the mirror. 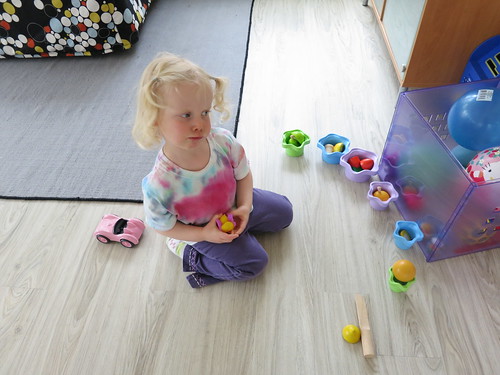 Josie still seems to be doing well with Audra. She seems to have an unerring ability to know just when Audra has fallen asleep though, so she can suddenly appear to wake her - once by announcing it's awake time because it's light out, another time by stopping directly in front of Audra's swing to (loudly) ask where her phone was. She'll also serve as a liaison since once I'm set up to nurse Audra, she'll find Ryan to tell him I'm ready and will yell at him to give me the baby :) She'll say hi to Audra when they're both in the car now, and will pet her head, stroke her face, and seem genuinely delighted when Audra smiles at her. We learned fairly quickly not to leave them alone together (as I came back to Josie getting ready to cut Audra's fingernails), but I'm trying to at least give Josie the semblance of some privacy with her, since she seems to not want acknowledgement all the time and has asked me not to look at her sometimes. So I watched her in the mirror the other day, and was touched to see her climb onto the bed where Audra was, get all up in her face with an expectant smile, and then wait for Audra to smile back :)

We hosted the Easter festivities at our house again this year, which is just getting more fun as Josie gets older. She ate a decent amount for dinner, seeing as how it was served during her snack time, and seemed incredulous about the tiny amount of pie I gave her for dessert, then earnestly asked everyone else if they wanted pie. She did well with the egg hunt, and then had a dance party in the living room after dinner. She especially loves playing with her cousins, and it's been so cool to see them interacting and how much fun they have together :) 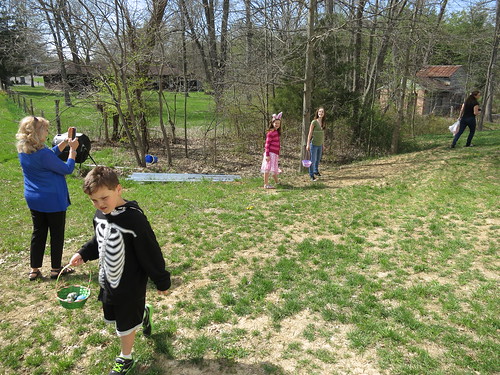 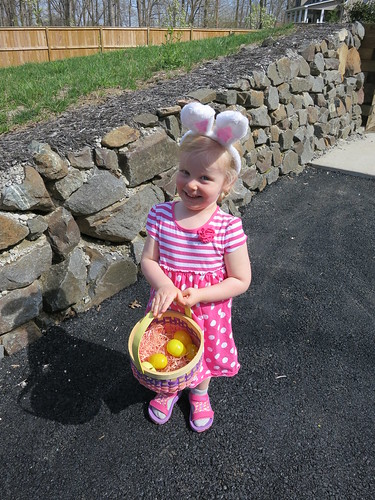 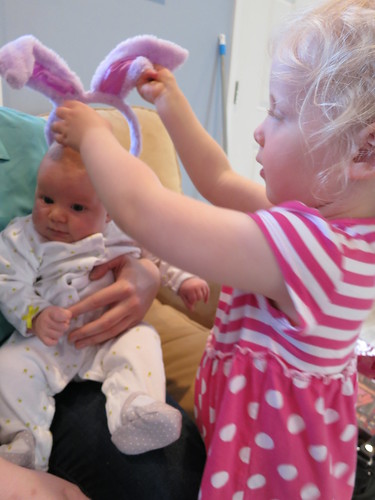 Given my preoccupation with Audra's sleep lately, I thought I'd give an update on Josie's sleep too. She doesn't always nap at school, but is still napping a solid 2-3 hours on the weekends (usually 12:30-3ish), although we'll wake her if it gets to be 4pm so it doesn't interfere with snacktime or her overnight sleep. We still help her get to sleep for naptime - we had been cuddling with her in her chair for about 10-15 minutes until she fell asleep and then moving her to her bed, but given that she is pretty big at this point and moving her is not a very graceful endeavor anymore (i.e., I've almost dropped her as an errant leg got caught up on her bed rail), we just started laying with her in bed until she falls asleep instead.

For bedtime, we start getting her ready by 8:30pm (dimmed light, baby massage, pajamas), and then she climbs into bed and we'll usually lay with her for a few minutes for some end-of-the-day cuddles, although we've also just tucked her in, given her a kiss, and left her a few times, and the end result is the same. She's then on her own, sometimes falling asleep quickly but usually gets some energy out first (singing, clapping, appearing to do a cheer routine) before she falls asleep, almost always by 9:15pm. All sleep at home is done in her bed now and alone (except for the few minutes of cuddling at the beginning and the rare occasion that we stay with her if she's sick), sleeping until we wake her at 6:40am on weekdays, and usually waking just after 7am on the weekends. She does occasionally wake at night still, but only rarely needs help getting back to sleep now. Given the situation with Audra's sleep, Josie's sleep is encouraging to me now, since we're fine with the path we took to get there (including bedsharing/cosleeping with her until she was over a year old), and we're very happy with her current sleep situation. Audra's sleep may be better or worse by time she reaches this age, but it at least reminds me and helps motivate me to be patient and supportive as we navigate through these early months of baby sleep :) 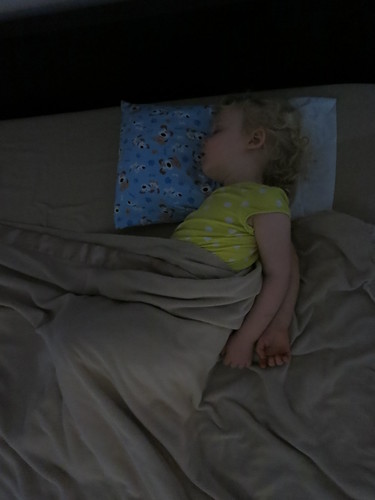 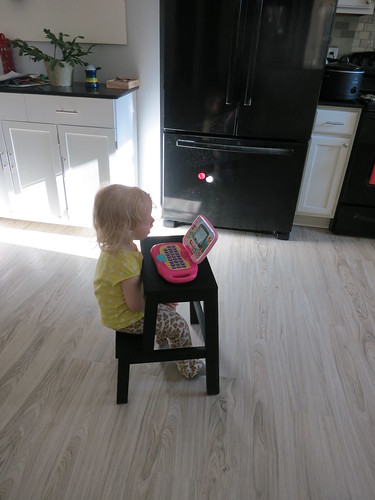 [Josie and her "work computer"] 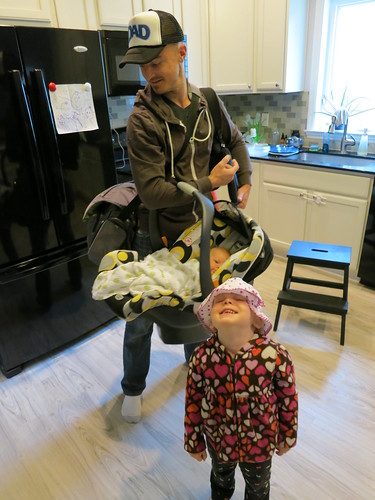 [So much stuff needed to leave the house...] 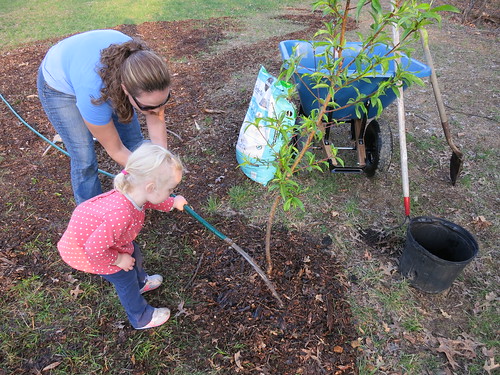 [Planting "her" peach tree with Aunt Alyson on Earth Day] 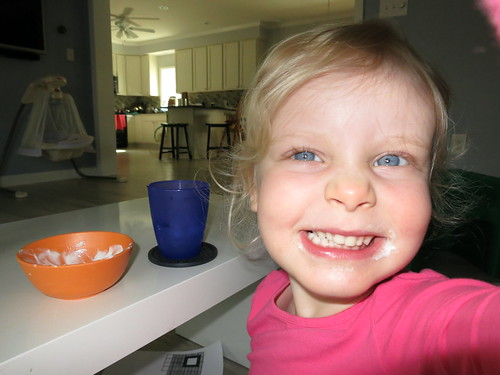 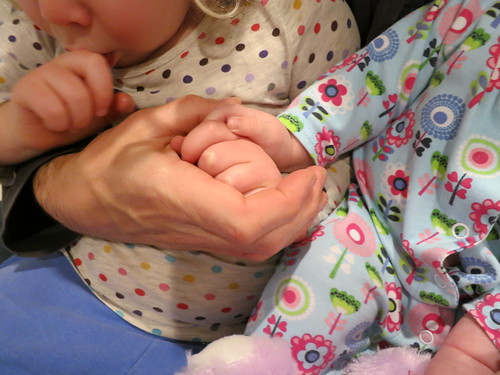