We realized last weekend just how little awake playtime we get with Audra at the moment when we put her on her tummy and she propped herself right up on her elbows. We didn't know she could do that yet, so at least daycare is taking care of tummy time ;) We're still in a bit of survival mode due to the current daycare sleep situation (i.e., where she still only sleeps for maybe 1.5 hours a day vs her normal 4-5), although it's not as stressful as it could be since it's all just temporary (as I keep reminding myself!). So every morning we let her sleep to the last minute we can until she needs to get ready for daycare, and then in the evenings we're basically running around (sometimes literally) trying to get me fed and her ready for bed before she completely melts down, usually within about 20 minutes from the time she gets home.

So needless to say, we don't want to exacerbate this by delaying bedtime to play with her during the week, but last weekend she was struggling with her naps again so we at least got plenty of playtime in with her then ;) She kept falling asleep but then popping right back up within minutes (sometimes with the biggest, saddest pouty lip ever), so she primarily took naps on Ryan the whole weekend but was pretty happy besides that. 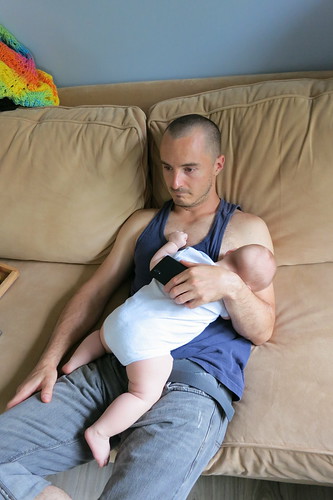 Anyway, so Audra can hold her head up pretty high now, and can roll to her side from her back, but is only listing to the side on her belly so far. She is gnawing on her hands like there's no tomorrow, but hasn't figured out how to get just one of her fingers into her mouth quite yet... I assume that's coming soon though. In the meantime, she's been working on her kicking. She seriously kicks so much, and with such determination and forcefulness that it makes me laugh almost every time :)
I'm realizing that I could use more playtime with her too... I focus so much on her sleep and trying to get things done around the house that sometimes it's hard to slow down and just enjoy the moment, whatever it is, but I tried to do that more last weekend and it was wonderful. I just sat outside with Audra and we talked to each other, and I made faces at her and pulled her up to sitting a bunch of times (which is her favorite thing at the moment, just after kicking). And one time that she woke right back up after finally falling asleep, I could hear her making cute little baby noises but was determined to pretend that she really was going to go to sleep (so that I could too) and kept my eyes closed for a few more minutes before finally opening them... to see her adorable little face gazing up at me, with big eyes and a big grin :) I was even able to have our first storytime with both girls, as we propped Audra up on the couch next to Josie and read several books together. 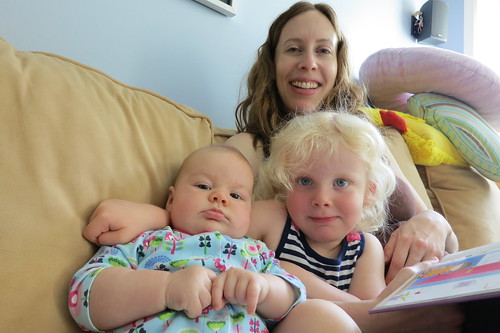 I'm still working on perfecting my diet too. I somehow forgot that ketchup has tomatoes in it, so lo and behold, Audra's poor face broke out again and she had some digestive issues last weekend after I had some fries with ketchup. So it looks like tomatoes, dairy, and strawberries are definite possibilities for what she's sensitive to, but wheat and asparagus seems to be ok. I'll probably test out peanuts soon, and maybe broccoli, but in the meantime, I'll just keep updating my list of foods I'm looking forward to having sometime next year ;) Calzones and lasagna also just got added to the list, since it was almost physically painful to have to turn down the lasagna Ryan's sister made last weekend. I'm still thinking about how delicious it looked. Sigh. 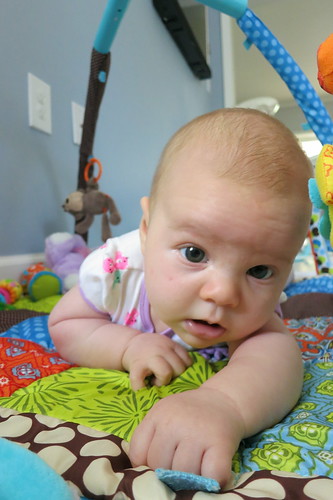 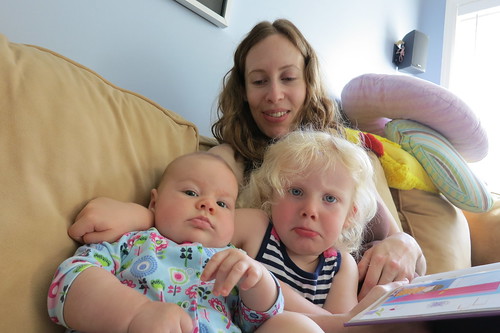