Audra discovered her hands this week :) We thought she had been showing more control over them the last couple of weeks, but it was nothing compared to what she's doing now. She's now able to reach out and grab hair, toys, etc., and I've caught her watching raptly as she moves her hands around and admires them :) Unfortunately, sometimes this admiration happens in the middle of the night, but what can you do? They're fascinating appendages. She also deliberately hit the toys on her bouncer - very slowly and carefully - and pulled the handle on the frog to make the music play.
If that wasn't enough for one week, Audra has also finally started laughing! She apparently laughed at daycare during the week, and it wasn't until Sunday night that she finally decided to bestow on us her happy little chuckle :) I haven't figured out what makes her laugh quite yet, but I am determined to figure it out soon. For as loud as she is in everything else, she seems quite stingy with her laughs so far!

With all of these developmental changes, it should have come as no surprise that her sleep would be affected too, although it's always easier to make that connection in hindsight. So we had a few nights of her waking the first time around 1:30am, then nursing the entire rest of the night... or if she wasn't actually nursing, she at least wanted me close by in case she decided to later, since she'd start flailing around each time I moved a muscle. Then as soon as I started getting a little panicky about this new state of affairs, she went the other direction, and still woke up a couple times over the course of the night and flailed around a bit in-between, but refused to nurse when I'd offer to help her settle down. 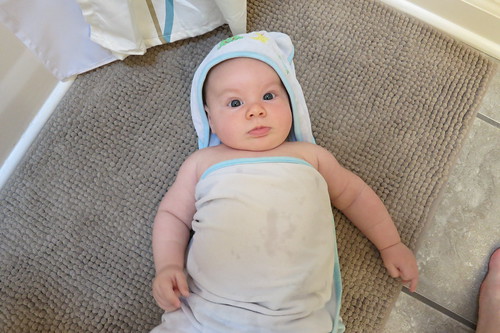 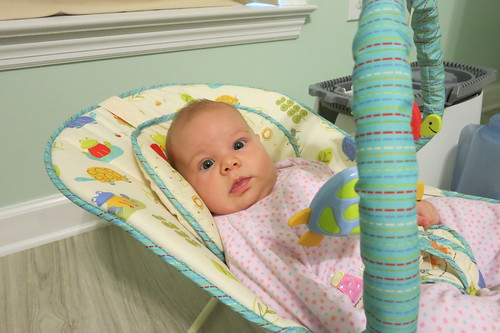