May was a pretty big month for Miss Josie :) She started in the "big kid" Early Preschool class at school, and that has gone very well. Her transition was fine, and she seems to have learned many more songs and stories that she likes to regale us with :) She memorized a few nursery rhymes now too, and on one memorable night, got a bit obsessed with Georgie Porgie... asking repeatedly why he ran away and seeming quite worried about him. She also memorized some of her books, and can call out the name of the book if I say a few lines of them (turns out I memorized some of them too!), and apparently learned most of the words to "Go, Dog. Go!" after having only read it a few times at that point, since she proceeded to "read" it to us with remarkable accuracy.

Josie is also mostly potty trained now. She had just a handful of accidents over the month, is only wearing a diaper at night now (and probably doesn't even need that), and has proven herself a pro at going to the bathroom while we're out (in fact, she seems to prefer it!). She generally does pretty well with at least trying if we ask her to, and otherwise can just mostly take care of things on her own if we leave her to it.

Josie also finally got tall enough and coordinated enough to use the glider we got her for her birthday last year. Once she figured out what she was supposed to do, her balance quickly improved and she and Ryan now ride down to the river or the playground all the time :) 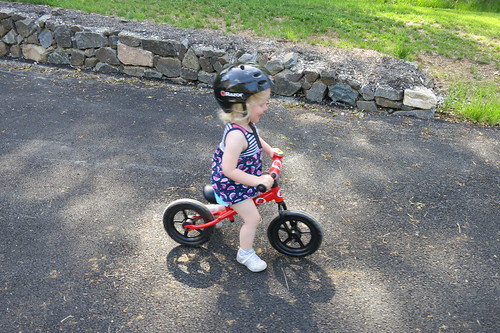 Our 8th wedding anniversary was on the 10th, so we went out for sushi  - my first sushi in over a year, and Josie's first sushi ever! She did a great job with her huge plate of food, although she was flagging by time she got to the tempura, and she claimed her Japanese soda was spicy (it wasn't, just very carbonated). That's the first soda we've ever given her, and I can't say I did anything to encourage her to try it again ;)

We also got our first international mail in a very long time. Our sweet friend in Germany sent us a package with all sorts of fun stuff for each of us, and Josie got her very first purse (that now must go with her everywhere) and a princess mug. 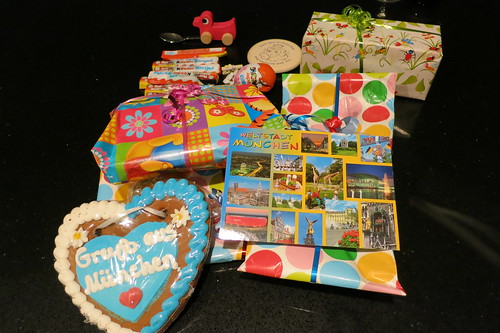 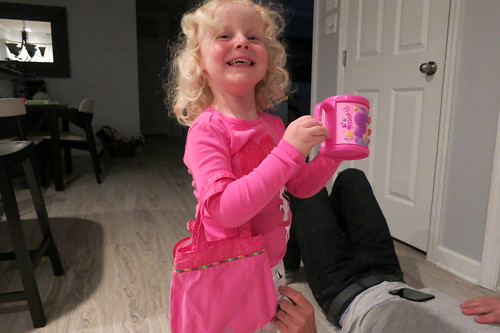 Josie had her first Kinder egg too, which she was quite excited about. She loved the toy inside it, although she didn't agree with me that it was a monster, first deciding that it was a crocodile, then settling on it being a dinosaur. Regardless, she liked it, and also liked the egg itself, which was made of chocolate. She had previously announced that her pretend cake (made with erasers) and a date both tasted like chocolate, so it was a novelty for her to eat something that actually did taste like chocolate ;) 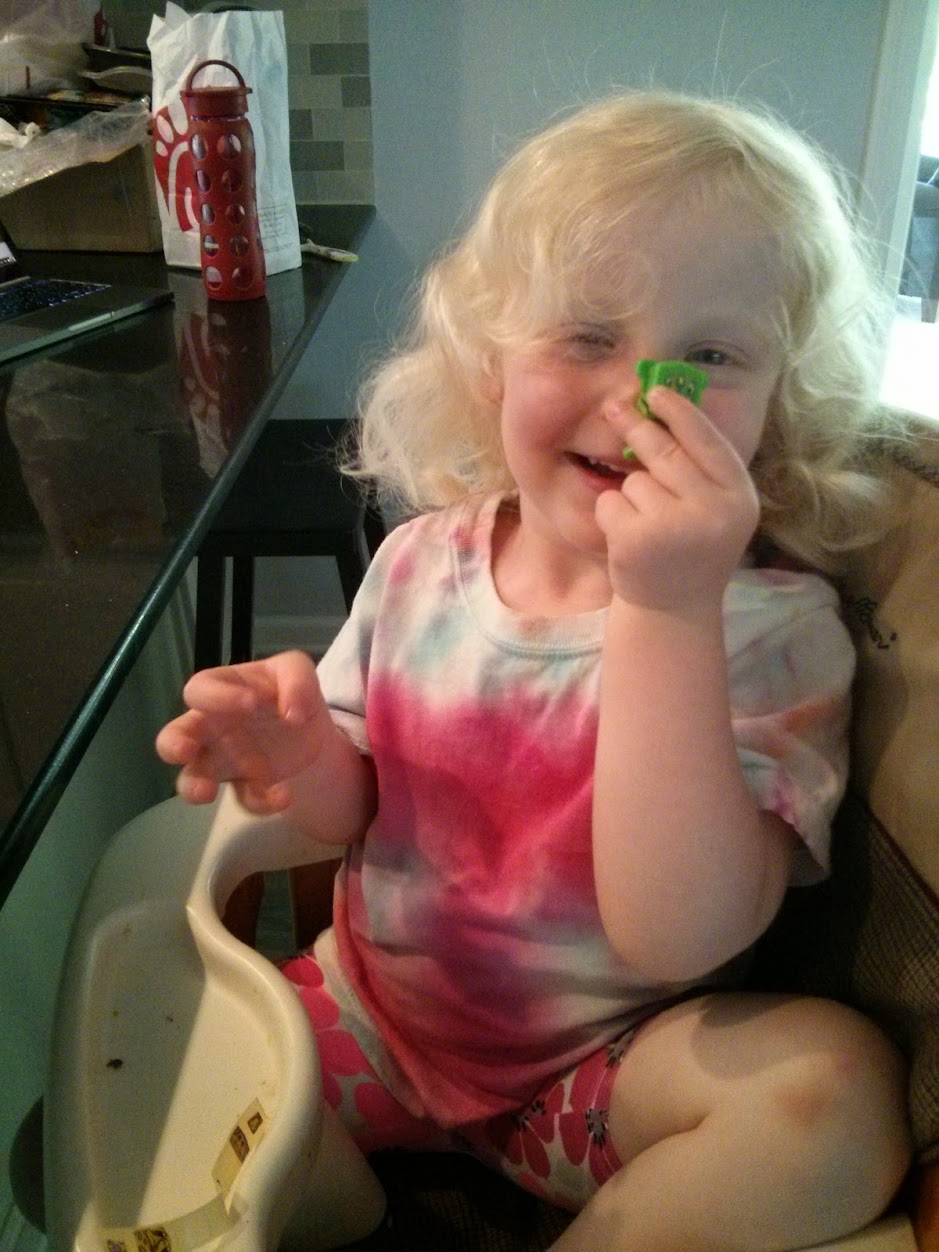 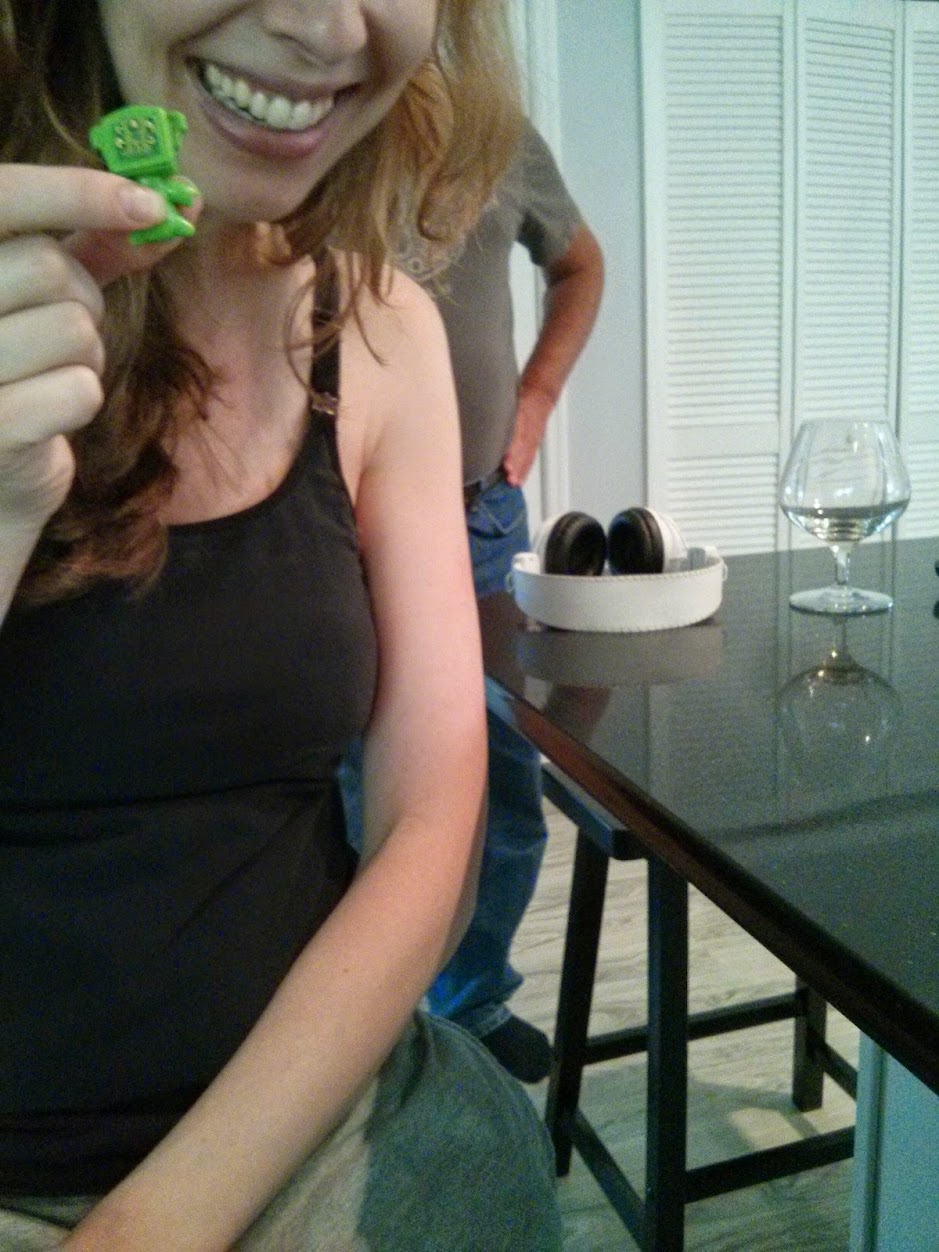 [Josie's picture of me with her monster]

Josie has still been doing quite well with Audra. We've been trying not to push her too much where Audra is concerned and to let her come to her on her own terms, and Josie has started showing more interest in her now. She loves it when Audra smiles at her, although she's less enthusiastic when she gets caught in the line of fire when Audra's kicking. She does like to help me with Audra, though, and will fetch burp cloths, help me pick out clothes for her, and helps with diaper changes and getting her ready for bed. But one day I asked her if she liked Audra, and she replied that she liked airplanes - not quite the answer I was expecting, but it was better than a denial at least! 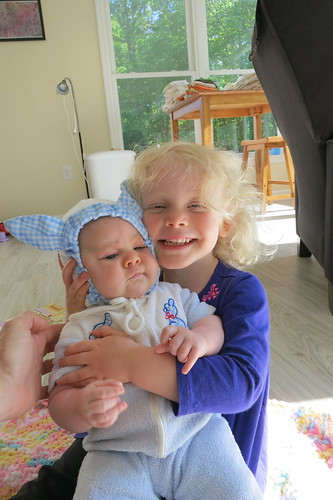 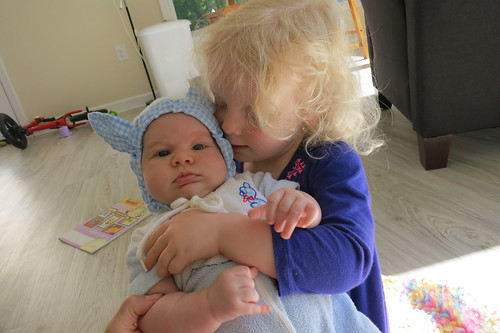 It hasn't been all fun and games, though. Josie continues to express her intense toddler emotions through lots of crying, which I'm pretty sure I prefer over tantrums, but it can still wear us down. One night Josie burst into tears no less than five times within ten minutes. At least now she is starting to be able to explain why she's upset, which is much more useful than asking her why she's sad and having her respond "Because I'm sad" like she had been doing. Poor thing. And after handling my frequent absences very well when I take care of Audra, Josie has also been wanting more mommy time lately. I wonder if she was doing so well before because I kind of was just out of the picture - for the first several weeks after Audra was born, I'd just see Josie for a couple minutes in the morning before school, and maybe a few minutes in the evening afterward, but that was it. Now I'm taking her to and from school and spending at least some time with her in the evenings, so I think having me back in the game has reminded her that I am an option. 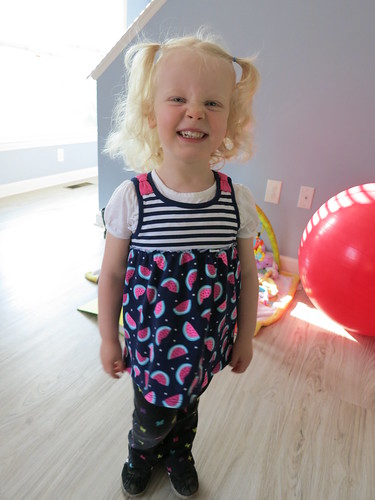 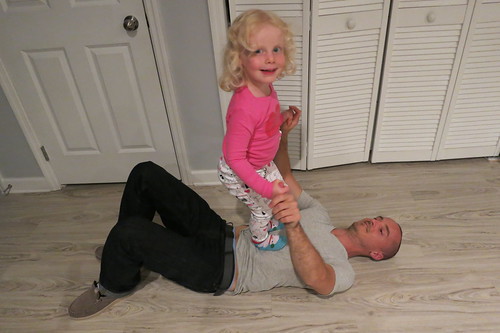 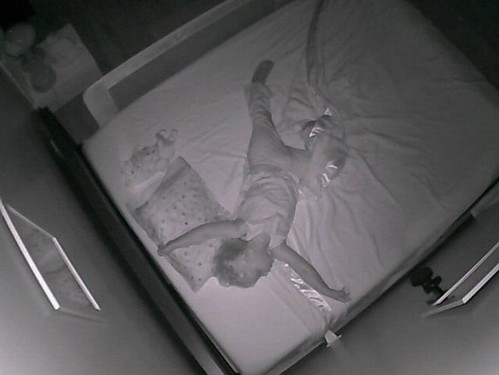 [She is a dramatic sleeper] 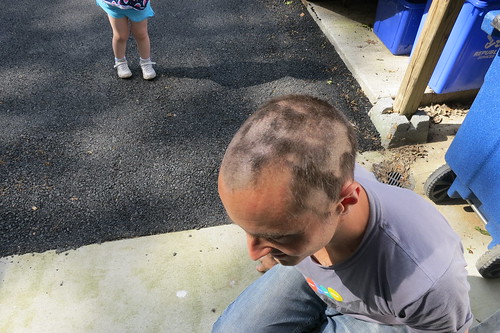 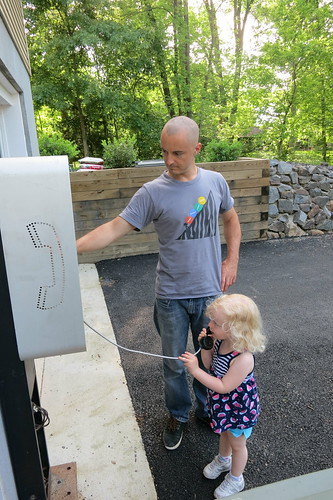 [She claimed she was calling cousin Riley here] 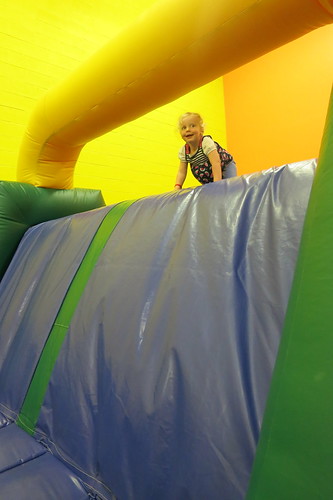