I can't really pinpoint what it is, but Audra seemed like a whole new baby this week :) I struggle a bit more with the newborn stage than any other stage (so far), so right from the start, I was pinning my hopes on 12 weeks as being when I'd turn the corner. And while the first 12 weeks were fairly tough for me, there were still plenty of bright spots and enjoyment in it. But the last couple of weeks I've just enjoyed Audra and the stage she's in more and more, and I'm just delighted with all of her new accomplishments :) That was something I was a little worried about, since this is not our first time through these phases with a baby and I wasn't sure if I'd be as excited as when we went through these early days with Josie. But I guess the part I didn't understand was that while, yes, this is our second time through this stuff, it's the first time through it with Audra - so I've been just as thrilled with every little kick and accomplishment of hers too :)

So Audra is moving differently now, with more smooth and controlled movements (punctuated with some adorable self-satisfied lip-smacking). She is able to lift up her head (and sometimes shoulders) into a little baby sit-up when she's on her back - maybe this is a precursor to rolling over? Either that, or she's just working on her abs ;) She is also able to grab her toys more precisely and is really showing more interest in them now.
She continues gnawing on her hands at every opportunity, but is especially diligent about it while we're trying to get her dressed. For some reason, Audra's hands become even more appealing to her as soon as they're covered by fabric, so it's a daily struggle to get her sleeves through the gantlet of her mouth and grappling hook thumb. She has started to get just a single finger in her mouth, though, so she's edging ever closer to being a finger-sucker (although last night she succeeded in gagging herself instead, so she has some work to do on this still). Audra is just fascinated with her fingers, and is easily distracted by them. She also gave Ryan her first high-five this week :) 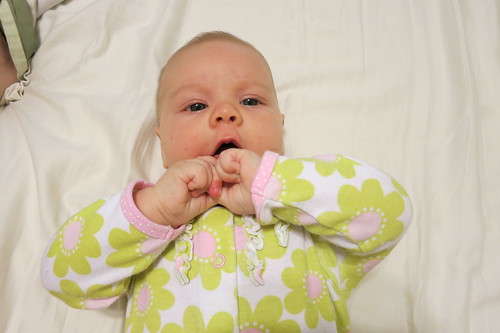 [What did her hands ever do to her?]
[Oooh, fingers]

Audra and I both have colds again, so although she seems to be almost better now during the day, she's still been congested at night which I imagine (slash hope) is what's affecting her sleep again, as she has been waking 3-4 times a night. She has been wide awake (and happy!) a few times around 4am too, so she's been getting some quality time in with her swing then. Once she started fussing after just a few minutes (and then nursed right down back in bed), and once she slept the rest of the night there, so it's a bit hit or miss. I'm not above using the swing for as long as we can (as I'm nervously eyeing the 25-pound weight limit) to help us all get more sleep, though, especially since I was so tired last week that I was genuinely surprised I made it to work in one piece. Not good.

Audra has been doing pretty well at daycare lately. She's been sleeping a little bit more (2-2.5 hours the last few days), eating the 16oz I'm sending with her each day plus some frozen, and apparently is happy and laughing a lot during day :) She has also been falling asleep in the car every day in the evening, which helps take the edge off for her so I can eat dinner relatively peacefully (although still rushed) before nursing her to sleep, and also makes for a far less stressful drive for Ryan. 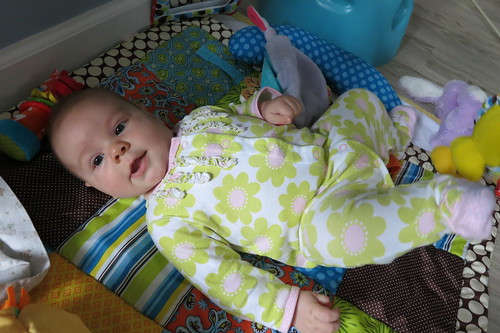 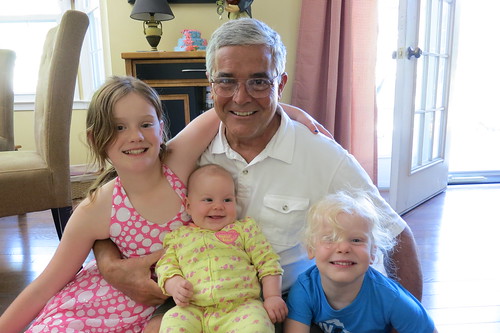 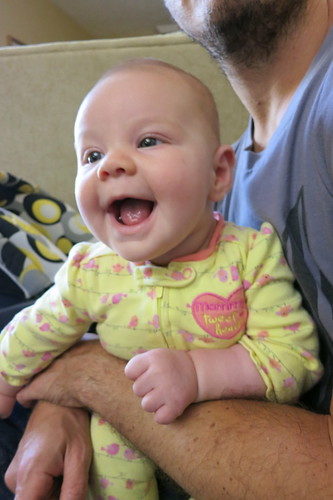 [Super excited about things!]
[Voicing her concerns to Ryan]
at 10:47 AM