Last week Audra had her 4-month visit to the pediatrician, which she was super happy about, making herself laugh as she punched and kicked while we were waiting for the doctor :) She is now 19lbs 9oz, 27.5" inches long, with a head circumference of 16.25"... so holding steady at 90th percentile for her head, and still off the charts for weight and length :) Her doctor thought she looked great, and she's getting closer to being ready to sit on her own. She certainly likes being pulled up to sitting and to sit supported in our laps, but she doesn't keep her hands on the ground long enough for tripod sitting to work for her quite yet.

Audra finished out her part of the visit with getting her next set of vaccines, which she did great with, only crying a little bit. She did much better after this round of vaccines (DTaP/Hib/polio combo shot and rotavirus) from the first time she got them, when she woke screaming and basically inconsolable three hours later. This time, she was a little fussy the next couple of days and not napping well, but seemed to do fine besides that. She also still has a little bit of a cold, with some coughing and a little bit of stuffiness overnight, so that could have played a role with her sleeplessness too.

Her sleep is still not great. She's been more difficult to nurse down at night again and woke up early several times (~5am vs her usual 6:30-7am), although there were some nights where she did much better than she has been at the beginning of the night, where she was still shifting around a lot but actually able to resettle on her own. She also has been doing this thing lately that's driving me a little bit crazy, where she just pops on and off while I'm trying to nurse her down - since she swallows so much air doing that, it means I have to burp her far more often than normal, which just wakes her up again even if she had been on the verge of sleeping... but if I leave her unburped, then she might eventually fall asleep but she'd just wake from the gas later. Neither option is ideal. But after a particularly tough time trying to get her down for a nap one day, I thought I'd try a pacifier when she started popping off... and it worked beautifully! She settled right down and slept well, and although we haven't had the same success with using the pacifier overnight yet, it's at least another tool we can use to try to get more sleep for all of us.

Audra has been a bit more sensitive emotionally this week. Ryan made her sad cry surprisingly frequently, just by being a little bit too loud, nuzzling her with his whiskers, or sometimes just making a funny face at her. A server at the restaurant we went to last weekend also made her sad cry - she was stroking Audra's arm and talking to her, and while Audra was happy at first, she started getting more tentative, then the lower lip came out and she just started wailing :(  On the other end of the emotional spectrum, Audra has been super into tummy time lately, and is quite happy rolling, spinning herself around, chewing on her mirror, and reaching for her toys :) She is also watching us far more closely as we eat now, which (if I remember correctly) is one of the early signs of being ready to start solids. It's good to see she's starting to get ready for it, and while we still won't start her on solids until she's at least six months, it's surprising just how quickly that's coming up! 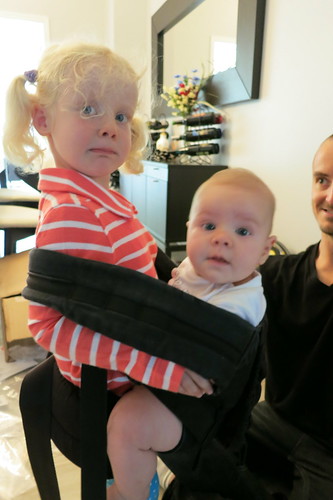 [Josie wanted to hold Audra in the carrier... it didn't go so well] 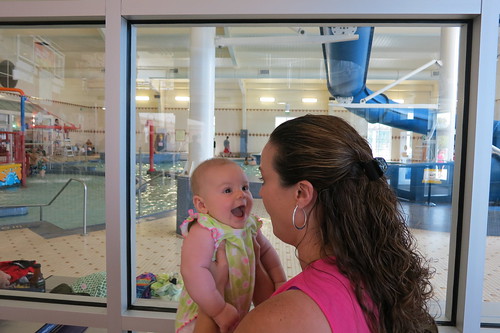 [With her Aunt Alyson at Josie's birthday party] 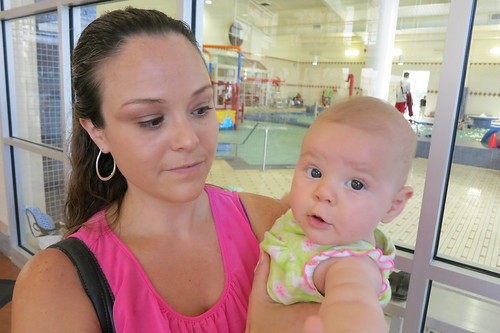 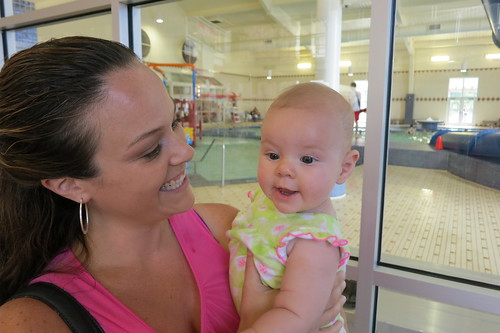