So I have a book called "The Wonder Weeks" that describes the first ten developmental leaps that occur during a baby's first 2 years or so. I've found it useful from a developmental standpoint, and usually slightly less useful from a "stormy" or "sunny" phase standpoint (the theory being that babies will be in a stormy period just before and as they master new skills, and then will be in a sunny phase afterward), since sometimes babies can be fussy or clingy or stop sleeping just because and they don't really need a reason beyond the fact that they are babies :) Audra has been hitting the different leaps pretty much spot-on so far, though, and supposedly she's on "Wonder Week 19", which is one of the longest, starting around week 15 and usually lasting somewhere between 1-6 weeks. That is my lifeline at the moment, as I am desperately holding onto hope that she is almost through this phase, especially since she just had some new skills pop up, since my goodness. She is still cute and sweet and (mostly) happy as anything, but she's giving us a run for our money lately.

Last week was a low point for sleep, at least for me. Audra was waking up around four times a night to nurse, and was up for the day usually 1-2 hours earlier than normal. With her needing to be resettled a few times even before her first nursing (which is usually between 11:45pm-1:45am), I was only getting a max of 2 hours of sleep at a time, so I just got so worn down -- with muscles hurting, back hurting, and a cold coming on again -- that by the end of the week I was just a mess. Crying at work because I was just so tired, running into things, having troubles talking. No good. And I usually use the weekends to catch up on sleep since I'm still napping with Audra, but then she only took half hour naps all weekend (and then woke very upset from most of them) vs. her usual 2 hours, so that didn't help either.

I'm not the best about asking for help when I need it (especially when it's in the middle of the night), but Ryan and I came up with a plan to hopefully help us all get through this phase in one piece (involving him taking her more overnight so I can go sleep elsewhere and me getting to sleep in one day on the weekend). And there have been some promising developments with Audra's sleep too - she actually fell back asleep all on her own one night when she woke around 1:30am, and she just started going longer between wakeups again (3-4 hours vs. the 1-2 it's been lately) and has been down to three wakeups a night for the last few nights.

Audra continues to like tummy time, and seems to be making some early attempts at crawling! We're kind of shocked that she's becoming more mobile so quickly - Josie had just started scooting around 11 months (only switching to crawling right around when she started walking at 14 months), so we thought we had a lot more time. So although it's a painstaking process still, she can now move herself forward (and back!) by a few inches.

She also was able to sit on her own for maybe 1-2 minutes, before she ever-so-slowly fell over - she seriously impresses me with her ability to do (what seems to be, at least) a controlled fall :) She is really into touching our faces lately, and while she still isn't doing so well on sucking her own fingers (she prefers the middle and ring finger together, or to attempt to suck on the base of her thumb), she certainly likes to suck on ours. She is also becoming more bold in her attempts to get our food, and has almost pulled plates off the table and intercepted food we were about to eat. We gave her the end of a "bunny carrot" (as we like to call the carrots fresh from a garden), and since it had been Josie's first, we saw some of the first real signs of possessiveness from Josie towards Audra. My guess is Audra's going to be no pushover, though ;) 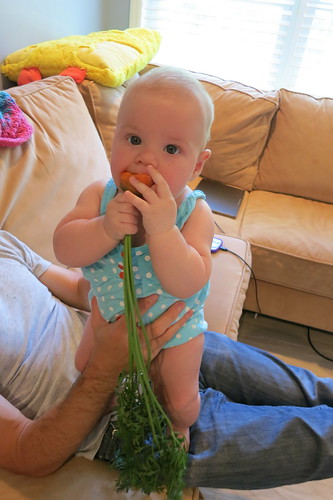 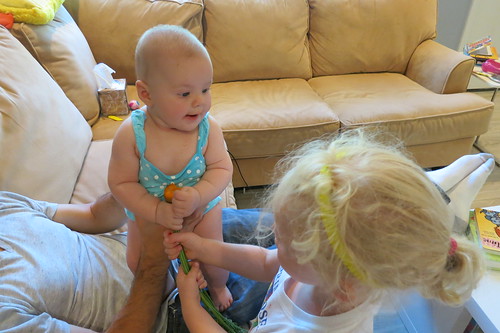 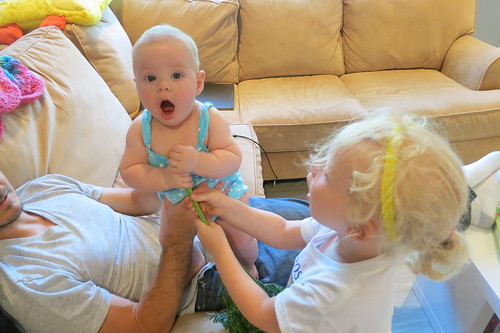 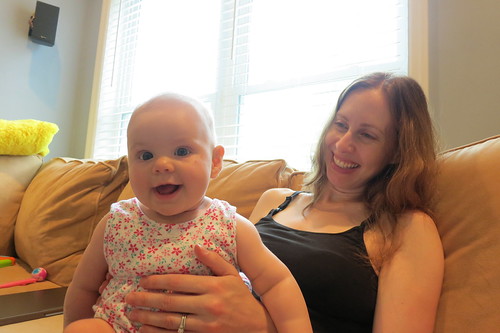 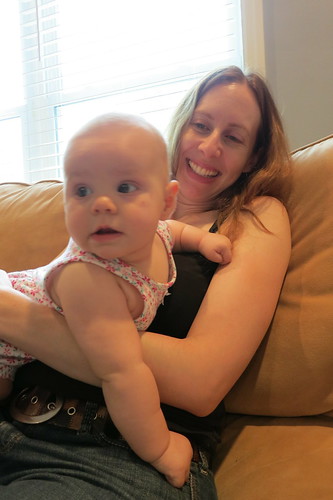 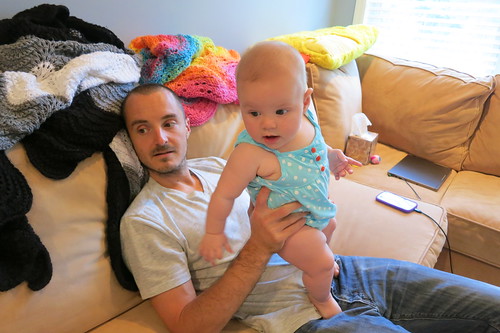 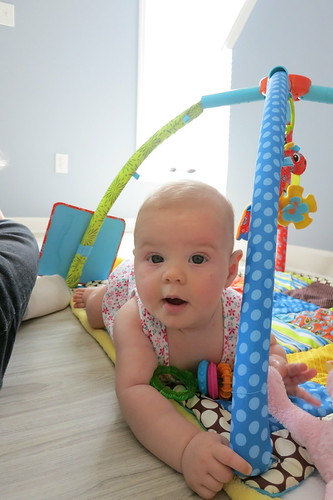 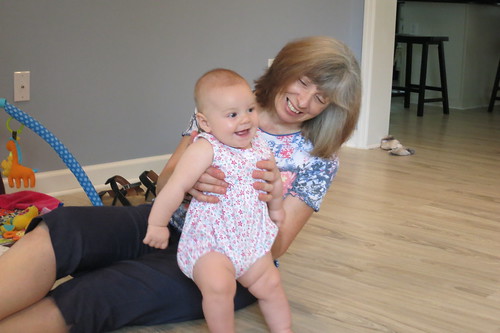