Audra hit a milestone last week that I was hoping we'd be able to avoid for a little while longer: her first ear infection. She has had several colds so far and hadn't had an ear infection yet, which I'm still attributing to the "baby massage" (first mentioned here) we do every night, and every morning too, when she's sick. Josie had gotten four ear infections by time she was about six months old (three within a few weeks of each other), and then we started doing the baby massage and she has only had two ear infections in the 2.5 years since then. So again, it seems a little hokey, but that also seems (to me, at least) to be more than just coincidence. What probably is just coincidence is the day Audra's ear infection flared up was the first time I had forgotten to do the morning massage too since she had gotten sick - I think it's a useful tool, but maybe not that powerful :-\ I do still feel bad about it though, especially since she had been getting a little more fussy and having more problems sleeping the days leading up to it.

Backing up a bit, we had gone out to one of the community pools with Ryan's family on Saturday to celebrate my birthday and eat pie, which was a lot of fun. Audra's still too young (and her skin too sensitive) for sunblock and chlorine quite yet, so she stayed in the shade the whole time, happy to be passed around to everyone before taking a catnap on me. After that, we headed over to Ryan's parents' house for dinner, where Audra was content to be held while we all ate food and she attempted to eat napkins and the tablecloth :) 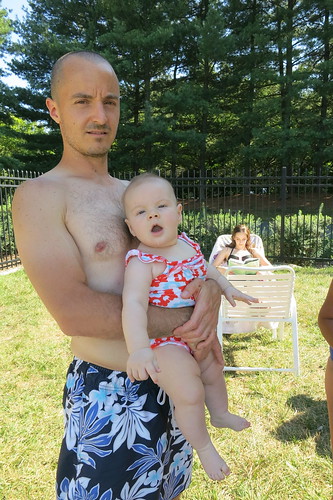 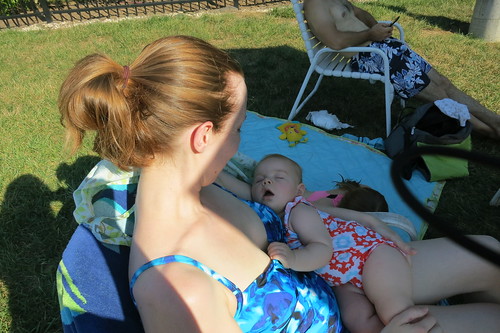 But as we were packing up to go home after dinner, Audra very quickly escalated into full-blown crying/screaming. We rushed home and I tried to comfort her while getting her ready for bed as quickly as possible, but all the while she's screaming on a whole new level, all sweaty with tears running down her cheeks. And I can't even really describe how miserable it is for everyone when she's this upset - it's almost like an out-of-body experience being in her vicinity when she gets that worked up, since she's just so loud, and the frequency of her cries just reverberates in my head so that it's hard to even think :( So I finally get her ready for bed, and she calmed down as she was nursing and fell asleep well around 7:30pm... but then woke the first time at 10:15pm and then every 45-60 minutes after that, for the rest of the night. She was pretty happy when she woke for the day though, so I thought maybe it was just a fluke, but then she was back to hysterics within an hour. After nursing again she seemed a bit better but still not herself, so when she woke screaming from her morning nap, I packed her right up and we went off to urgent care (with her screaming the whole way).

She gave a few smiles to the doctor there, through all her tears, but it was just so sad to see her that miserable. Her eyes had also been a bit goopy for the last week, so I had him check those as well, but her eyes and lungs looked good... just not her left ear, which was infected. So she's on amoxicillin now, and we were able to stop with the Tylenol for her pain after the first 24 hours. And while her sleep marginally improved after that, the new issue is that the amoxicillin is upsetting her tummy, so now she's uncomfortable from that overnight.

Oh! And even before the ear infection Audra had had another night of waking about every hour or so all night, as far as I can tell because I had eaten strawberries the day before. So it's been an especially rough week for sleep (and that's not even taking into consideration my apparent inability to sleep when I'm running a fever, as I have been the last couple of days). She did much better last night, though, and only woke 3-4 times. Funny how what constitutes a "good" night of sleep can change very quickly when it follows a horrendous one ;) She also was able to get herself back to sleep on her own a few times each of the nights she was up so frequently, so that was a silver lining as well, to see that she is getting more capable of doing that.

After talking about it for a few weeks, we finally got the exersaucer out of the attic for Audra, which seems to be a big hit with her. She is very intent on hitting all of the things, although she hasn't quite figured out that she can bounce in it too. Tummy time (at home, at least) kind of took a back seat to the exersaucer this week, although she can apparently now roll multiple times in a row. "Apparently" since I didn't see her do it, but given that I left her in one place and she very quickly moved a few feet away, I have to assume that she has learned to do multiple rolls in a row now :) 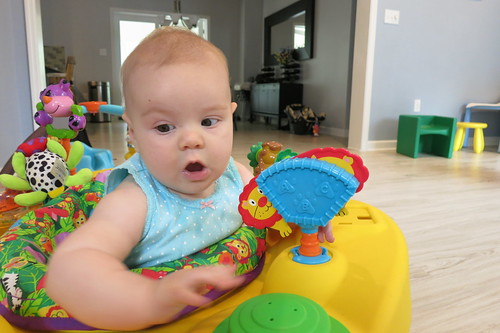 Audra's hair is also starting to come in more. It's still pretty light and fuzzy, but especially on top it's getting longer and a little bit thicker, which I think is a little more obvious in the picture below: 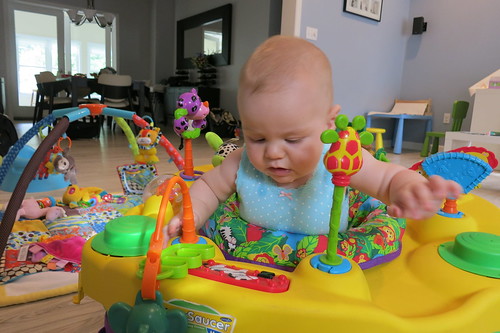 Audra and Josie were sweet together this week. Audra has usually seemed a touch apprehensive about Josie (perhaps because Josie is a whirlwind of toddler at the moment), and would still smile at her, but maybe not right away. This week, Audra's smiles at Josie came much more readily, and she was actively trying to look at Josie, with Audra craning her head around the car seat to see her and smiling and laughing at her. Josie has started taking over the task of brushing Audra's hair in the mornings, and she helped me get Audra ready for bed last night too - I agreed to let her brush her hair and pick out her sleeper, but vetoed Josie actually giving Audra her medicine :) Since Ryan was on a work call, I tried to nurse Audra down with Josie in bed with us too, and while Josie was good and stayed quiet the whole time, when Audra flung herself away from me (possibly asleep), I watched in horrified slow-motion as Josie reached out to tap her on the forehead... which promptly set Audra back to wiggling :) Audra managed to get hold of Josie's hand and seemed to have a "Goldilocks" moment - her fingers seem too small for her to suck on, ours seem too big, but Josie's were just right :) And Josie didn't seem to mind either, offering her hands up to Audra and giggling the whole time. 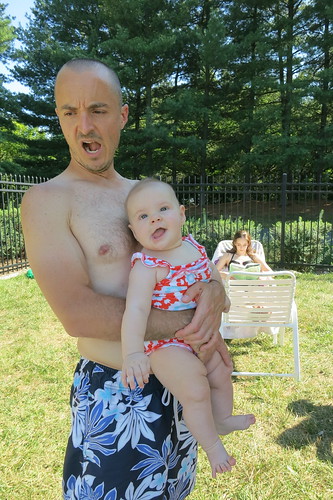 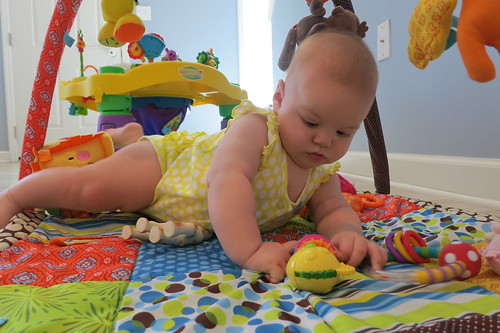 [Contemplating the transgressions of her rattle] 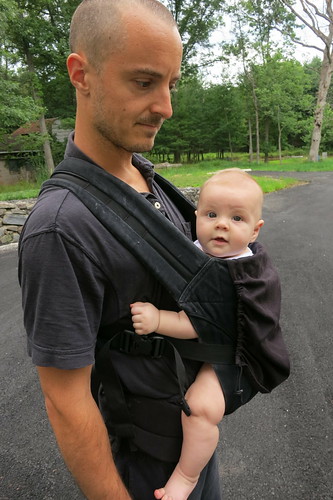